Greenwich is a park of two halves. There’s the bit down the bottom, near the Cutty Sark with the National Maritime Museum and Queen’s House pulling in boatloads of tourists every day. Some of them walk up the steep hill to visit the Royal Observatory and take a photo of the amazing view from the top. But that’s generally as far as they get. The other Greenwich Park is beyond that – a park where locals go, full of hidden treasures.

Yannick I went down last week to visit the rose garden at Ranger’s House.  We took the train from Charing Cross to Blackheath and walked across the heath to the Blackheath entrance to the park, thereby avoiding the tourists and the long walk up the hill.

Ranger’s House is a Georgian villa which is apparently pretty spectacular inside, with seven hundred works of art from the Wernher Collection on display. But we weren’t there for the house; it was a sunny day and we’d come for the roses.

Ranger’s House rose garden is possibly the most formal rose garden in London, arranged in concentric semi-circular beds surrounded by a clipped hedge, with one huge shady tree to break up the rigidity of the planting. 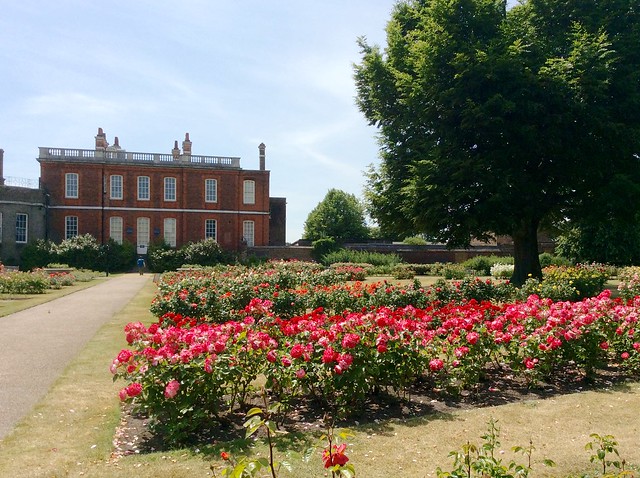 There’s more to see in a surprisingly extensive park. There’s the flower garden, planted with formal beds in what I think of as English Park style. There’s a deer park too, though it’s fenced off so you can’t get to close to the deer, just see them from carefully chosen viewing points.

And I have to admit we came down the hill for tea and to see the two hundred metre long herbaceous border, said to be London’s largest.

And Yinka Shonibare’s ship in a bottle that used to be on the fourth plinth in Trafalgar Square. It was transferred to Greenwich after the Art Fund launched an appeal and raised £264,300 to help cover the costs.