An icing sugar house in a leafy London suburb with turrets and crenellations like a gothic castle. Even today it’s like something out of a fairytale, but back when it was built, in the mid eighteenth century, hundreds of years after gothic architecture fell out of fashion, it must have been quite mind-boggling. Welcome to Strawberry Hill House, the magical white palace Horace Walpole built himself in Twickenham.

Horace Walpole was the son of Sir Robert Walpole, Britain’s first Prime Minister. He was the author of the first gothic novel The Castle of Otranto, and spent forty years, beginning in 1749, turning his house into a gothic castle that would be one of the must-see sights of his age. He inspired a new fashion for gothic that led to the Victorian Gothic Revival and Pugin’s Houses of Parliament. 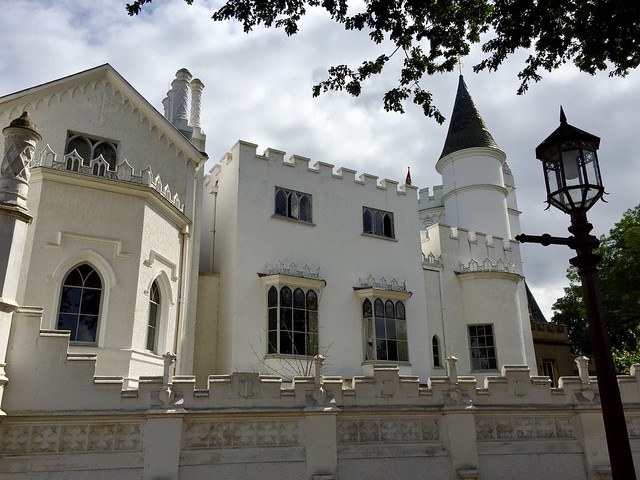 It’s a minor miracle that the house still exists today. When Walpole died it was inherited by the Waldegrave family, but in 1842 the wicked seventh earl sold off Walpole’s entire collection of furniture and objets d’art, including the painted renaissance glass in the windows. Luckily the Victorian Earl of Waldegrave managed to buy back about half of it. 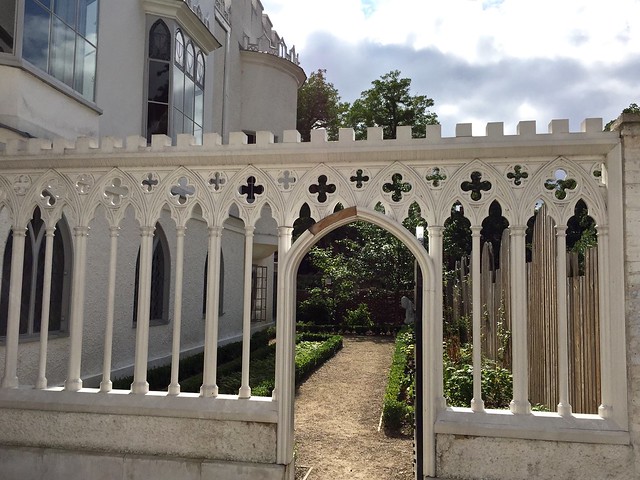 The house remained in the Waldegrave family until 1923 when it was sold to St Mary’s University College which used it for teaching and accommodation. In 2002 the Strawberry Hill Trust was granted a 120 year lease and has been maintaining and restoring the house ever since. 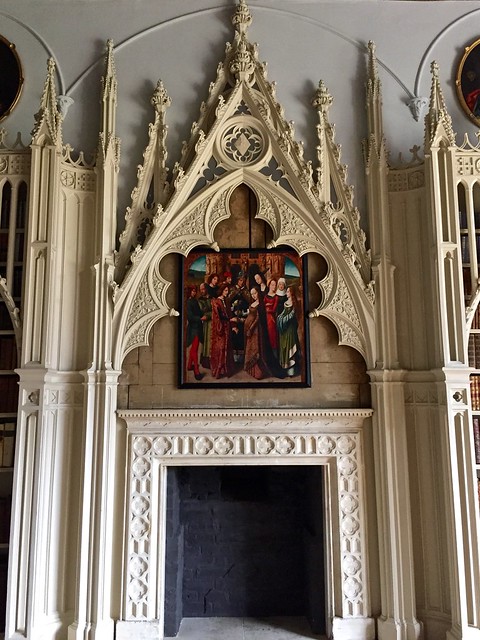 Walpole made the entrance hall deliberately gloomy to set the gothic atmosphere. The painted glass gothic lantern is a copy of the original. 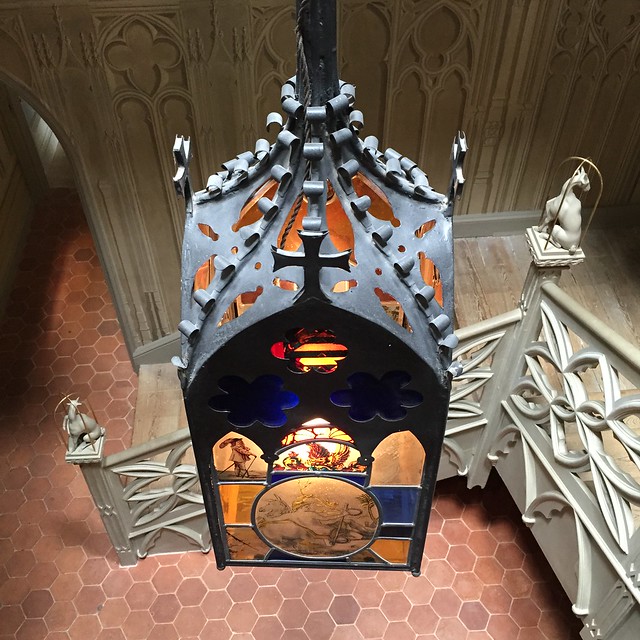 At each corner of the staircase is a carved antelope holding a shield. 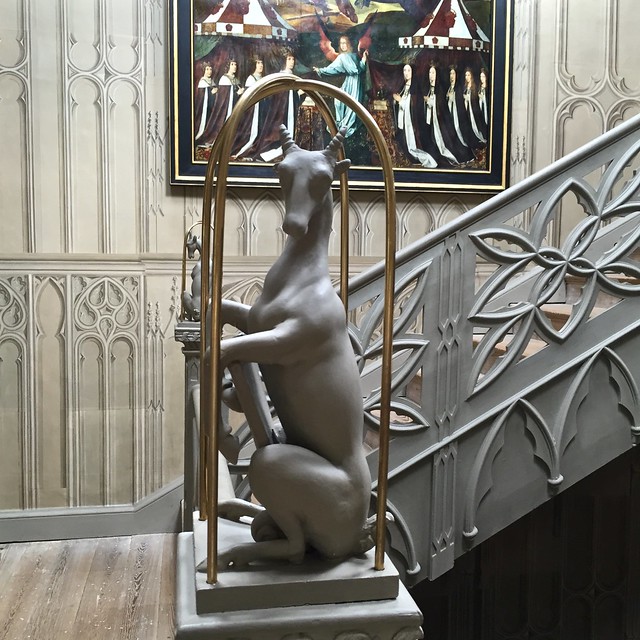 The windows in the Yellow Bedroom have family crests and heraldic devices.

The windows in the Round Drawing-Room are Victorian glass, commissioned by Lady Waldegrave. They show portraits of Tudor monarchs on either side of the Waldegrave coat of arms.

The rooms are being restored with reproductions of Walpole’s original wallpaper, copied from fragments. 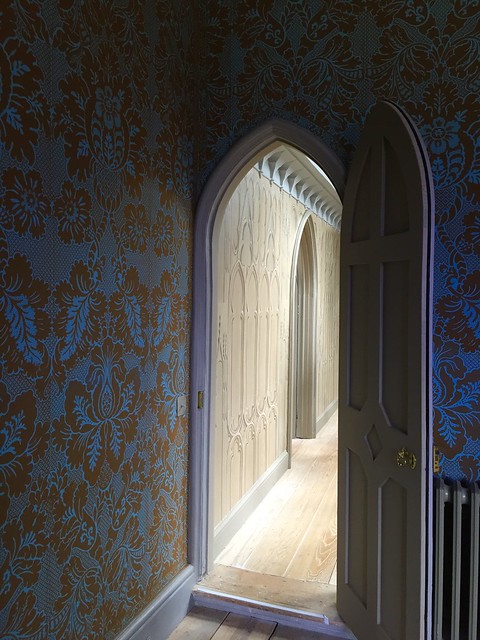 The jewel in the crown of the house is the gallery. Fifty-six feet long, thirteen feet wide and seventeen feet high, as Walpole proudly tells us in his guide to the house, it’s an elaborately decorated spectacular showpiece. It’s hung with crimson damask, newly woven as part of the restoration. 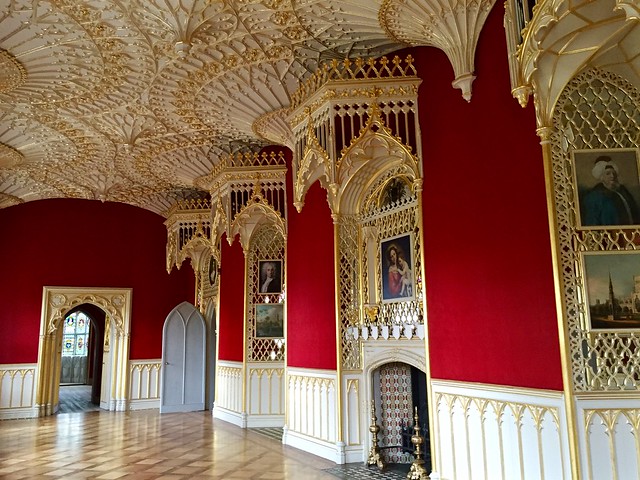 The ceiling is copied from one on the side aisles of the Henry VII chapel at Westminster Abbey. 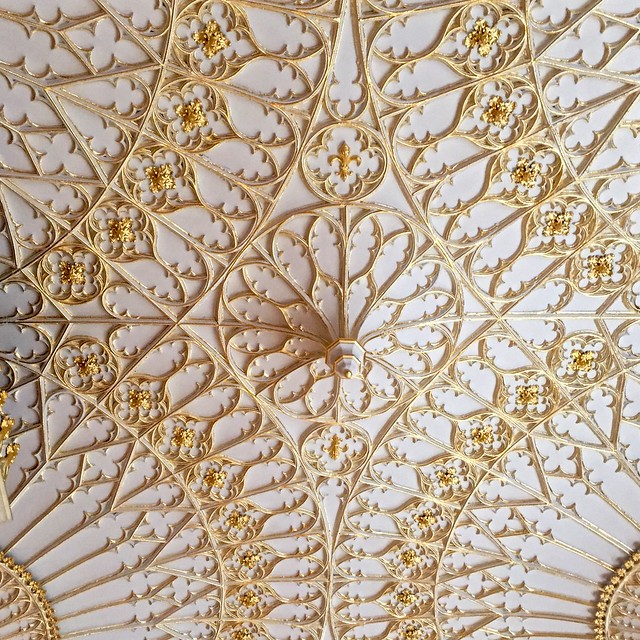 The side recesses are finished with gold net-work over mirrors, copied from the tomb of Archbishop Bourchier at Canterbury. 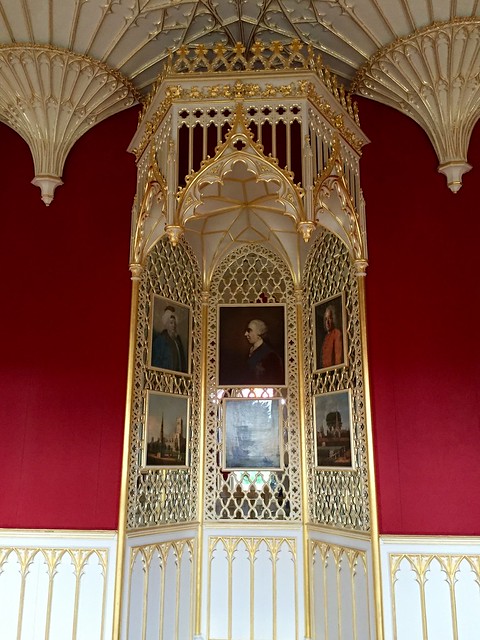 After the gallery anything else is an anticlimax, but luckily there is a café where you can get a restorative cup of tea. To get to Strawberry Hill, take a train from Waterloo which takes about thirty minutes, but check the opening times of the house first as they’re a bit erratic. Entrance costs £10 for adults, less if you’re a National Trust member. 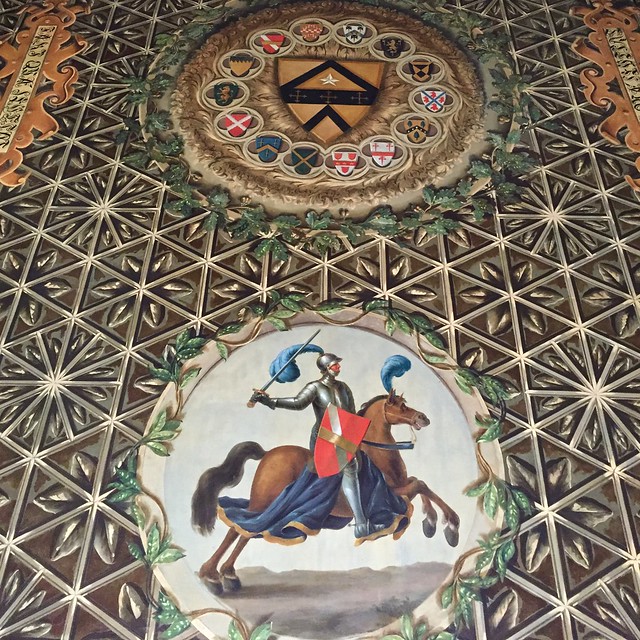 11 thoughts on “Strawberry Hill House – where the Gothic Revival began”