Now that summer’s over and the rugby world cup’s finished, we Londoners can look forward to (briefly) getting our city back before the Christmas tourist influx starts. And with the fine weather holding, it’s a good time to go and visit the places that you never normally go to because they’re just for tourists. Like the Royal Mews, for instance.

The Royal Mews is the bit of Buckingham Palace where the Queen keeps her carriages and stables the horses that pull them. If you’re lucky some of the horses might be in their stables when you go, though most of them are out earning their hay. 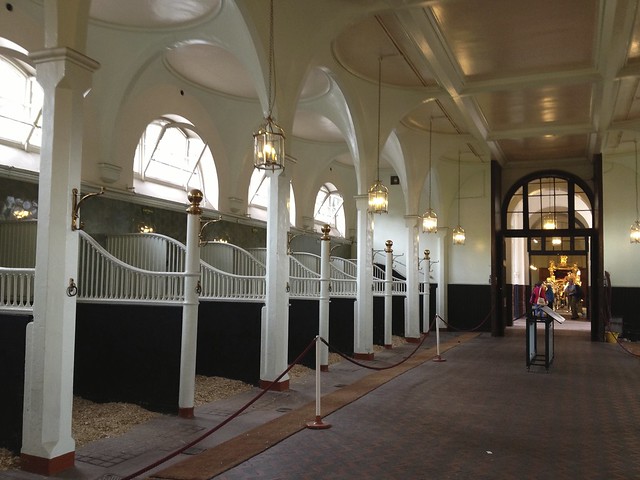 Every day since 1843 a messenger brougham (a light, four-wheeled horse-drawn carriage) has set out from the Royal Mews to collect and deliver post between Buckingham Palace and St James’s Palace. We caught it just as it was heading out on its travels. 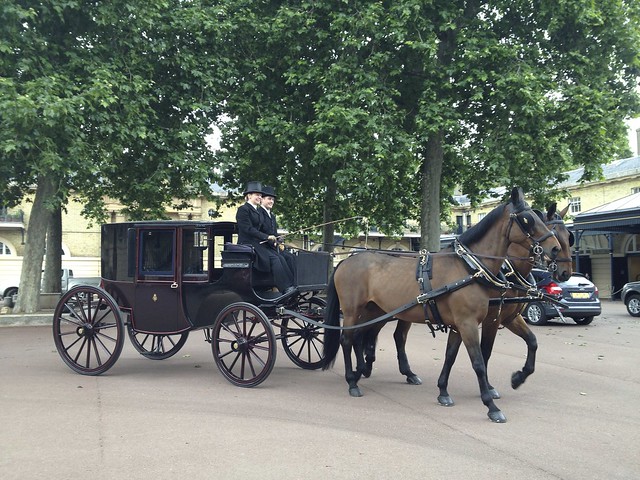 There are various coaches on display in the mews. This is the Irish State Coach which the Queen uses to travel down Whitehall for the state opening of Parliament, drawn by four white horses. 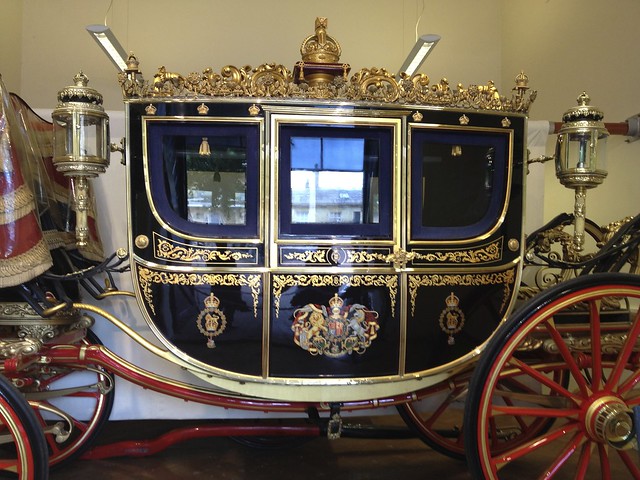 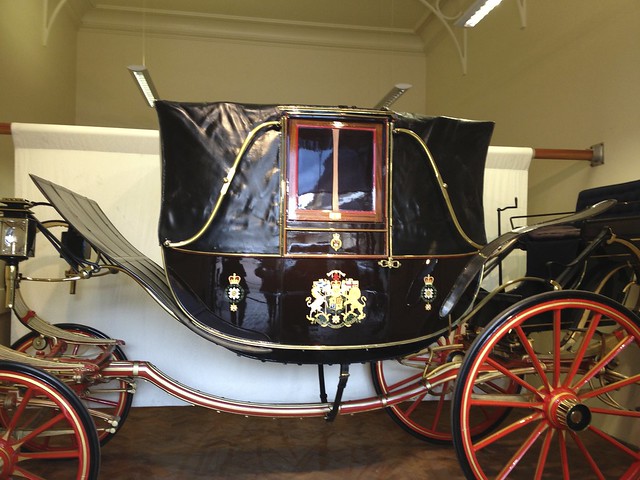 The highlight of any visit to the Royal Mews is the Gold State Coach, which has been used at every coronation since George IV in 1821. It has minimal suspension and is apparently a dreadfully uncomfortable ride. William IV said it was like being in a ship tossing in a rough sea. 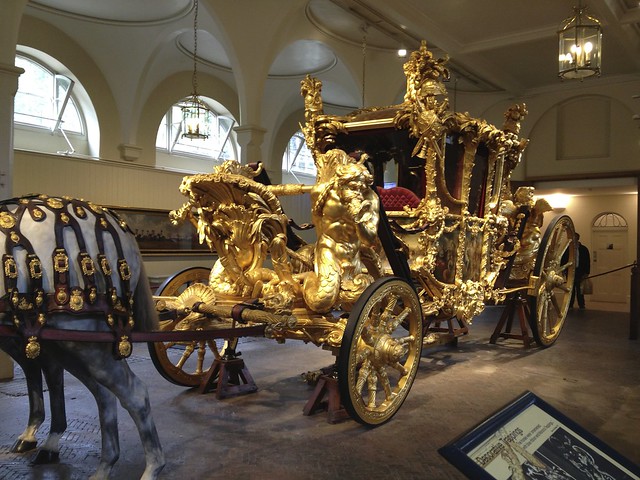 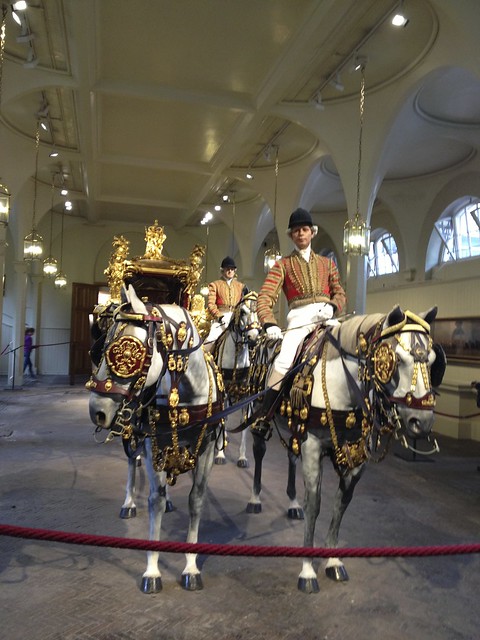 It was originally driven by a coachman, but nowadays the eight horses are postilion-ridden in four pairs. It has gilded brakes which have to be operated by the grooms. 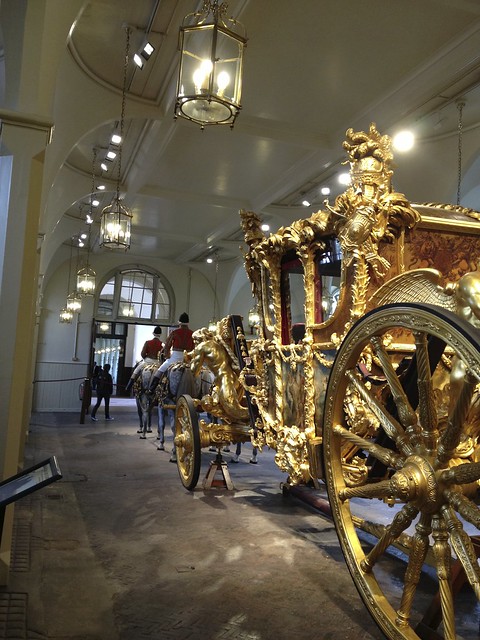 It’s covered in gold leaf and is decorated with cherubs, crowns, palm trees, lions’ heads, faces, tritons and dolphins. The three cherubs on the roof represent England, Ireland and Scotland and the four tritons, one at each corner represent Britain’s imperial power. (A triton is a sort of merman.) 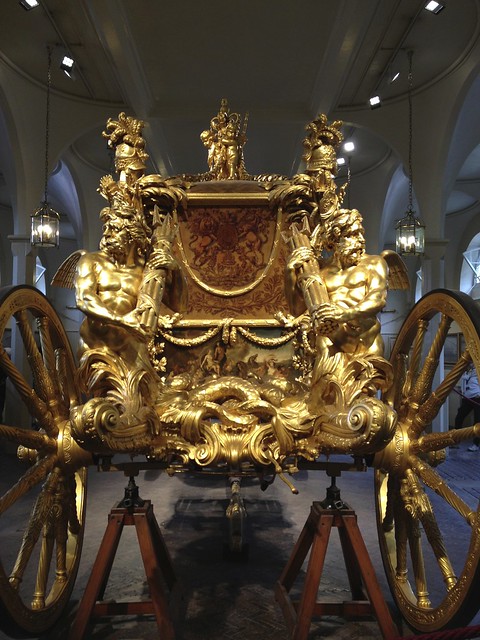 The painted panels on each side are by Giovanni Battista Cipriani. They celebrate the wealth and success of the British Nation. (Bit of a theme going on here.) 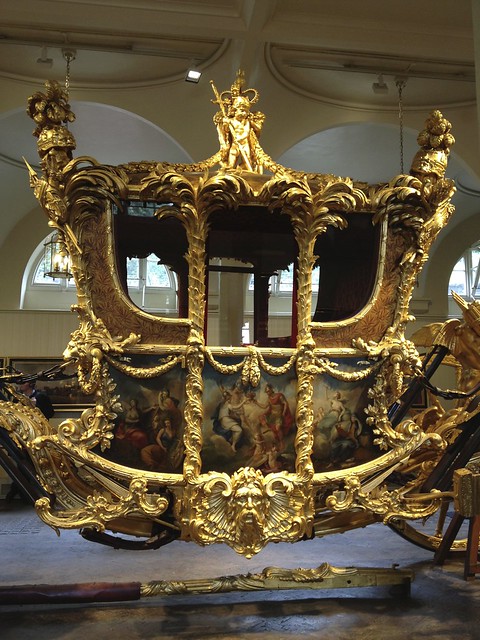 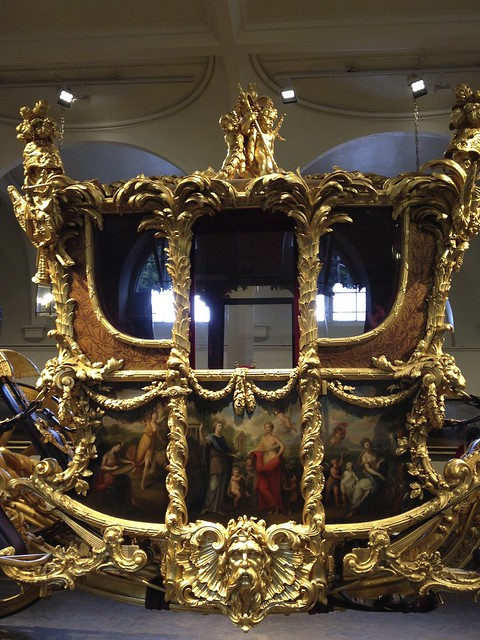 The Royal Mews is open Monday to Saturday 10 am to 4 pm (5 pm in summer) throughout the year, excluding December and January. Entry costs £9 for adults. and you can book online.