There’s always something new to do in London, and my new thing this week is visiting Canada House in Trafalgar Square. It’s home to the High Commission of Canada in the UK and it’s recently undergone an extensive refurbishment. To showcase the result they’re running public tours on selected Fridays – so I went along to see what it’s like.

Pretty impressive, is the answer. For one thing, it’s very laid back of them to allow unrestricted photography, which is what has enable me to share these pictures with you. For another, they’ve done a spectacular job of renovation with the focus on showcasing contemporary Canadian artists.

The tour starts in the entrance hall, where a throne made for King George V to use at the official opening of Canada House in 1925 is on display. 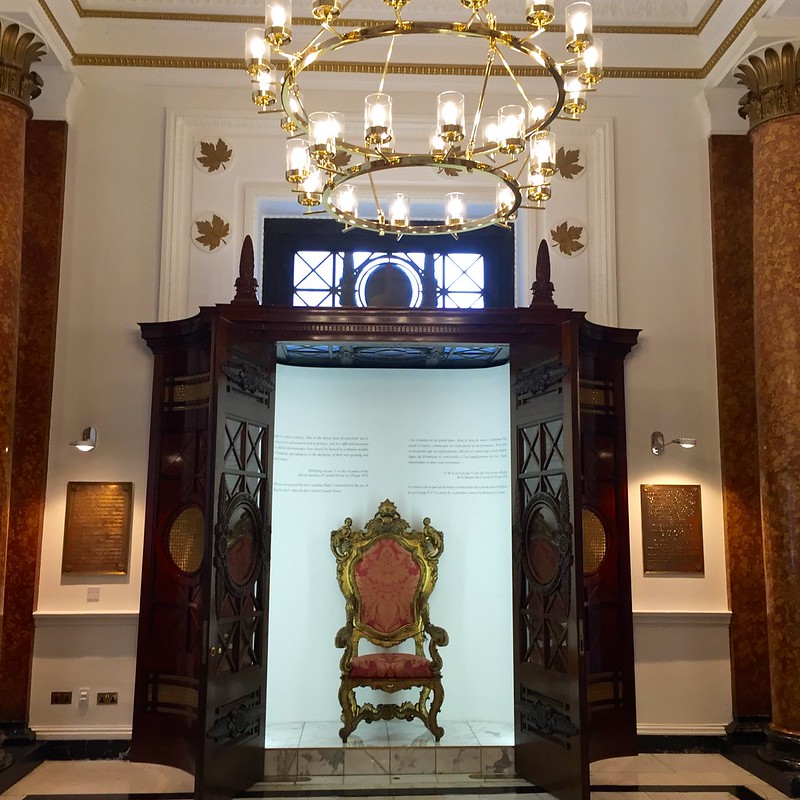 The grand staircase is hung with a fourteen metre high glass and metal lighting installation by Vancouver designer Omer Arbel. 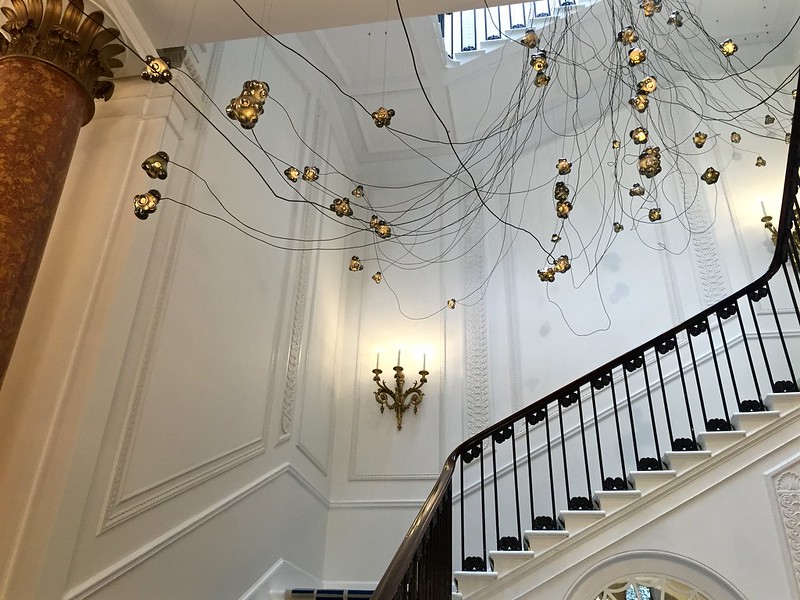 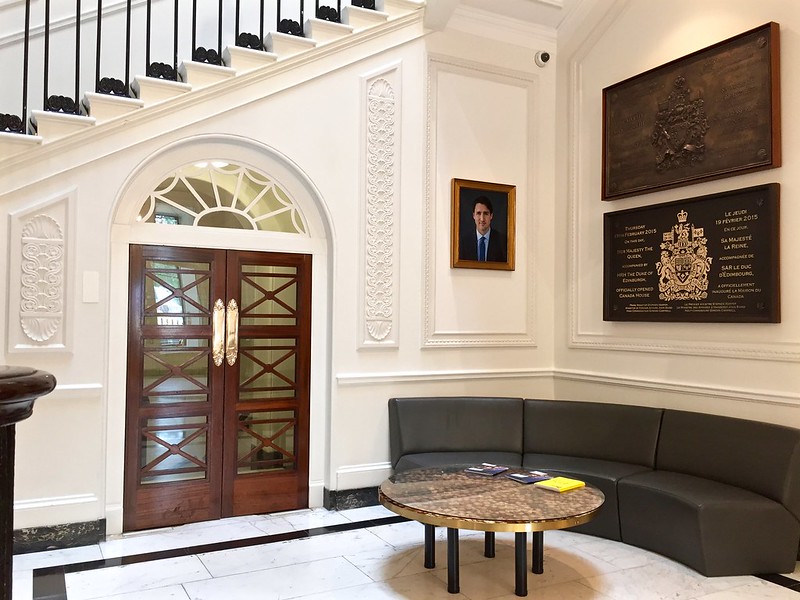 Canada House was originally the premises of the Union Club, a gentleman’s club built in 1824 in the Greek Revival style. In 1963 Canada acquired the northern half of the building from the Royal College of Physicians, and the two sides were renovated to fit together into one. This picture by British artist A E Bottomley shows how they looked before renovation.

In 2012 they got their hands on the old Department of Culture, Media and Sport building next door and the process of combining the buildings and renovating them began again. The Queen, accompanied by the Duke of Edinburgh, officially reopened the building on 19 February 2015.

The Mackenzie King Room on the ground floor spans the two original buildings.

The MacDonald Room on the first floor, named after Canada’s first Prime Minister, has a spectacular gilded ceiling.

The upper floors feature a series of meeting rooms named after each of Canada’s provinces, territories and oceans. All the rooms have specially woven carpets by Creative Matters Inc based on Canadian artworks. 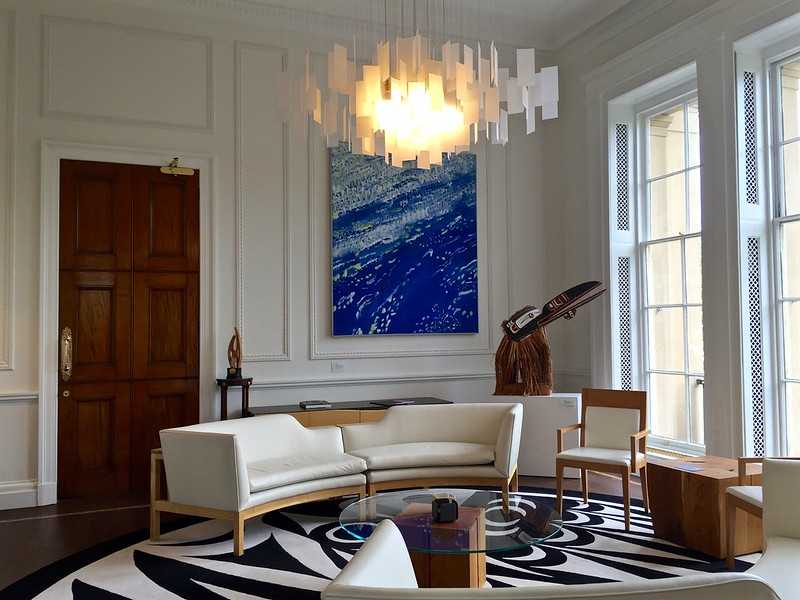 The Quebec room has a more traditional feel.

The Ontario Room has a walnut meeting room table and credenza by Style Garage.

The Sir Wilfred Laurier Room has a backlit structural glass wall by Warren Carther that evokes images of Canada ranging from the beaver to snow.

But it’s the view from the roof terrace that really impresses, looking out over Trafalgar Square and the National Gallery. 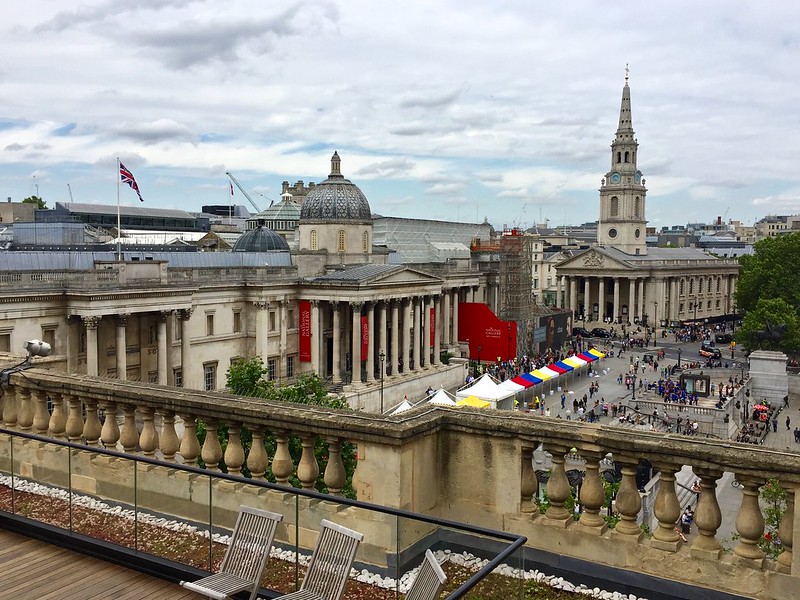 Canada House is free to visit but you have to book onto one of the guided tours which take place on Friday afternoons until the end of August.

3 thoughts on “Inside Canada House”