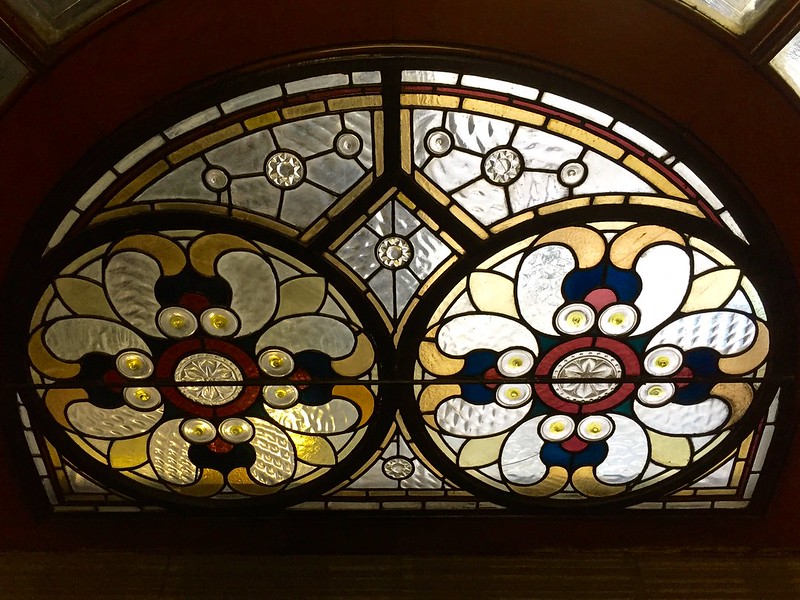 You can find it on the Strand, just opposite the Law Courts, next to the entrance to the Temple and its gardens which I wrote about in the summer. It’s the Law Courts branch of Lloyds Bank, and it must be the only bank where the staff don’t bat an eyelid if you wander around taking photos. 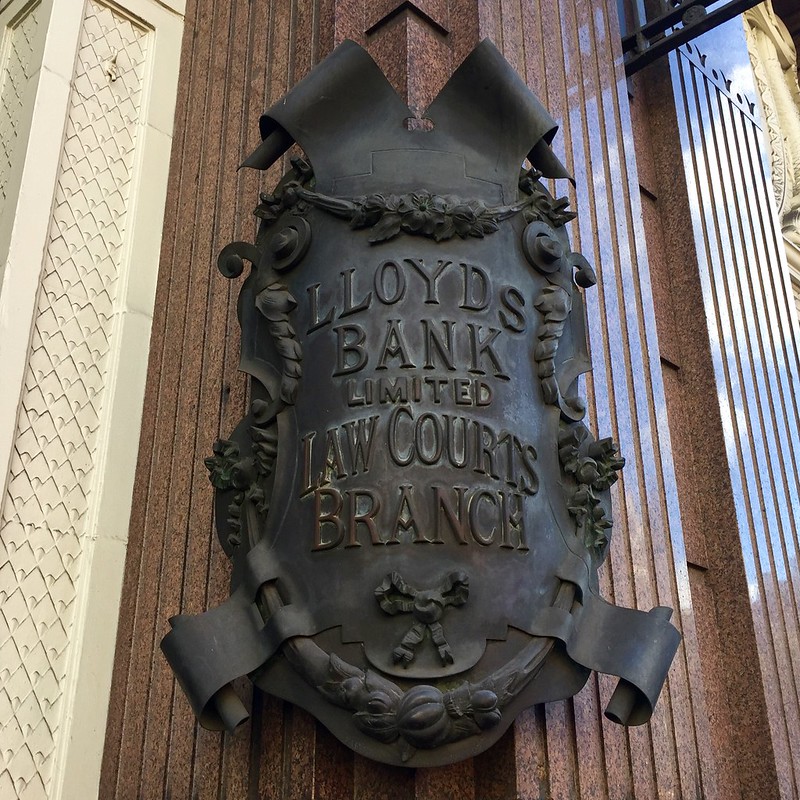 The bank began life as a restaurant, built in 1883 by architects Goymour Cuthbert and William Wimble, who also designed the old Baltic Exchange. It had electric light, produced from steam engines and dynamos, and air conditioning powered by two women on a tandem in the basement who drove a giant bellows. Despite its beauty and innovative technology the restaurant wasn’t a success – it closed after only three years. 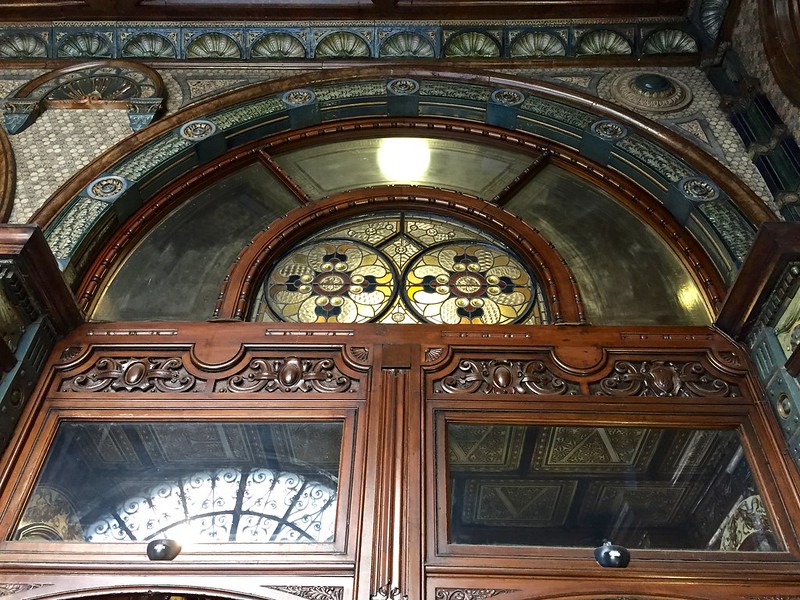 In 1895 the building became a branch of Lloyds Bank, when they merged with two other banks, Praed & Co and R Twining & Co. They left the building almost untouched – the Penny Illustrated Paper called it ‘the handsomest and most elegant bank in London’. 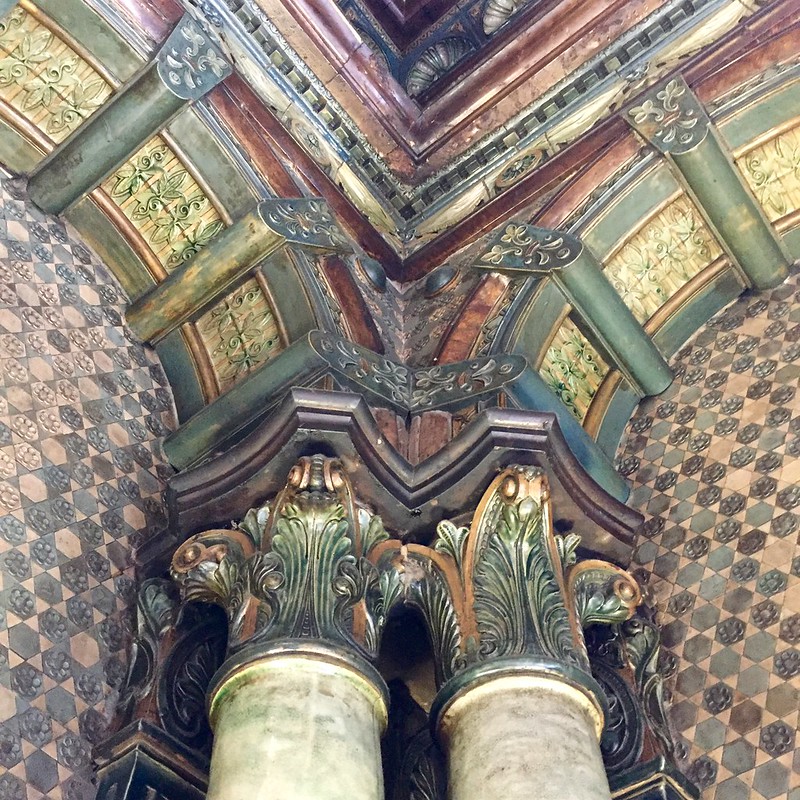 The entrance is covered in mosaic tiles of sea green and blue like a fantastic underwater world. They tiles were made by Royal Doulton and the design was by John McLennan who produced the work in his Lambeth studio. In the restaurant’s heyday the two fountains, which nowadays are dry, were supplied with water from a 238 foot deep artesian well. 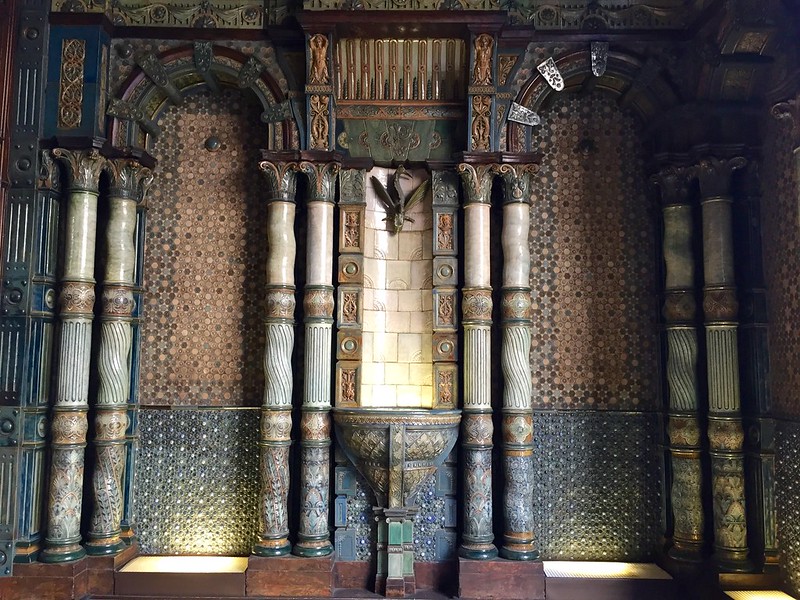 In places the effect is as though the walls had been covered in jewels. 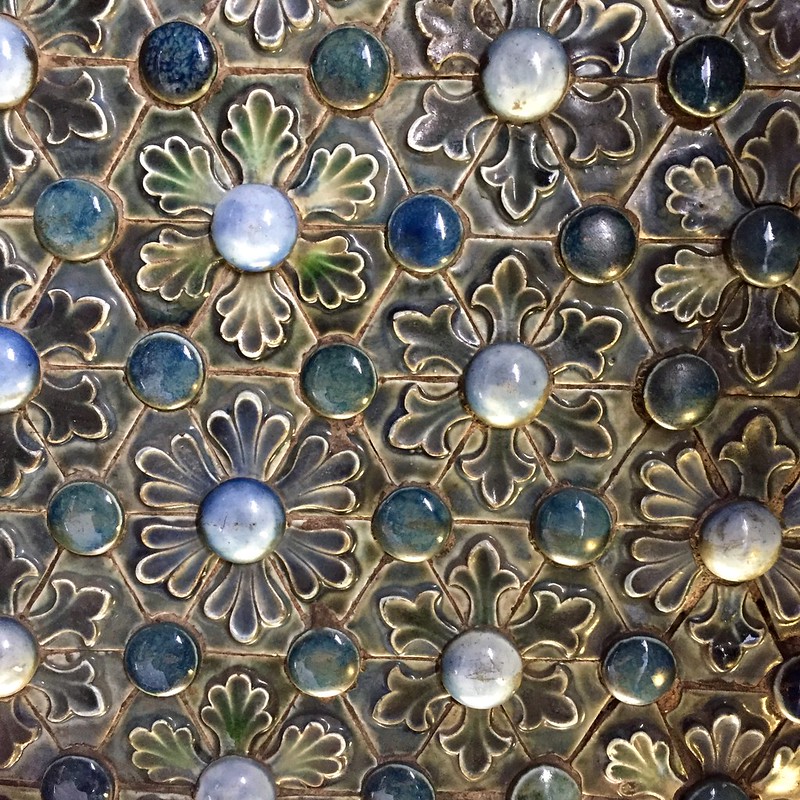 The entrance is decorated with stained glass and elaborate coats of arms, reflecting the period when the restaurant was briefly called the Palsgrave after the Palsgrave Tavern which stood on the site in the seventeenth century. The Palsgrave Tavern was named after Frederick of Bohemia, who married Princess Elizabeth, daughter of James I. 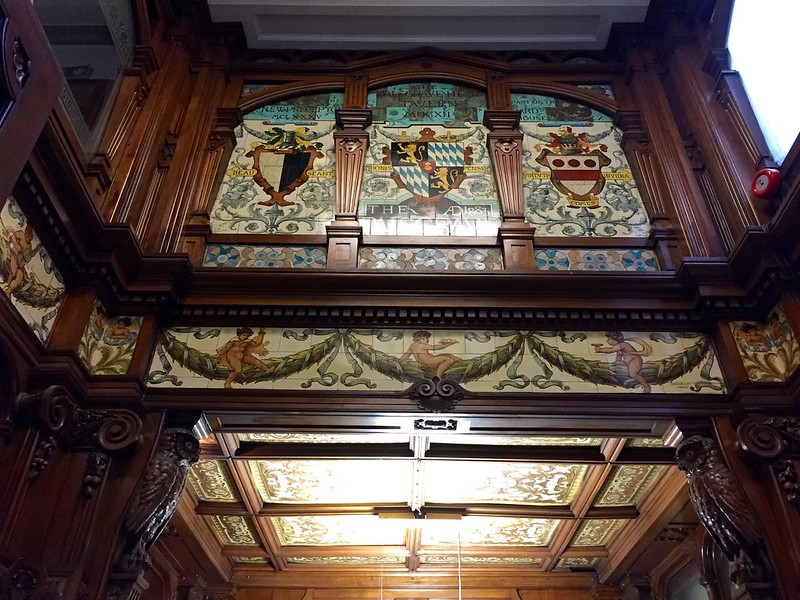 The interior is panelled in American walnut and sequoia wood set with an elaborate series of tiled panels handpainted by John McLennan. 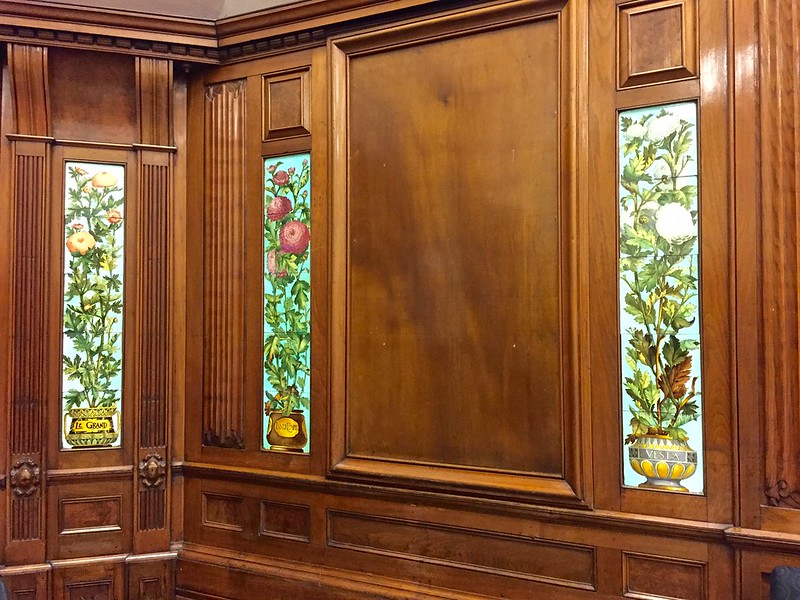 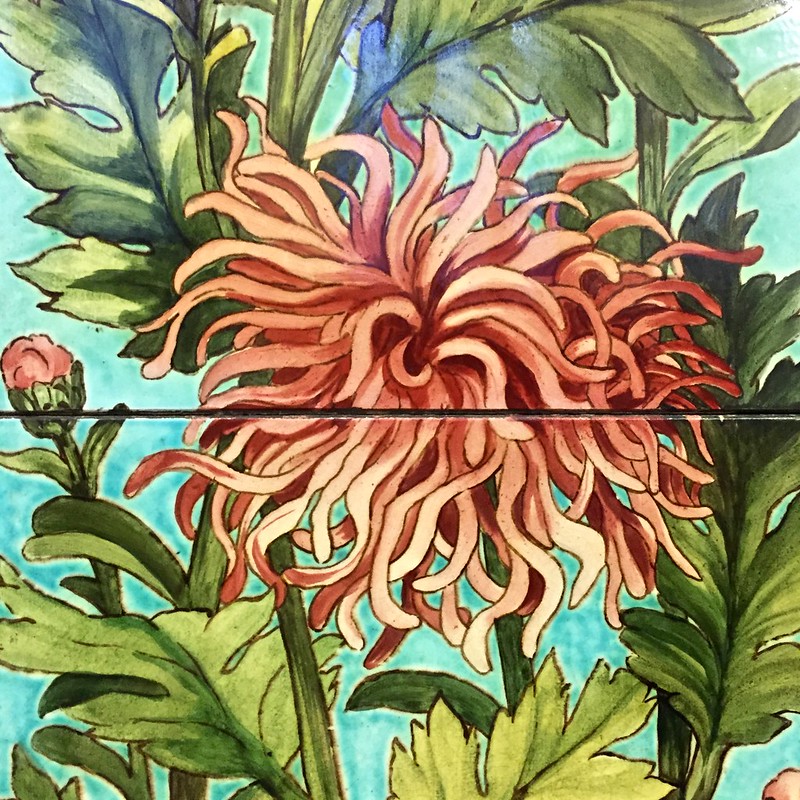 One series shows the plants that grow in Temple Gardens, including a sequence on the plucking of red and white roses that led to the Wars of the Roses, said to have taken place in Inner Temple Garden. 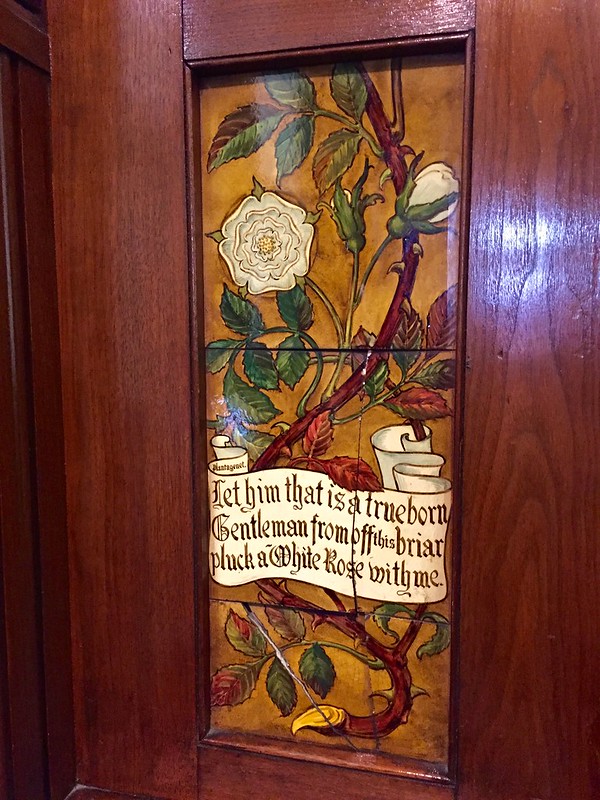 Frederick and Elizabeth of Bohemia appear on a pair of panels either side of the door. 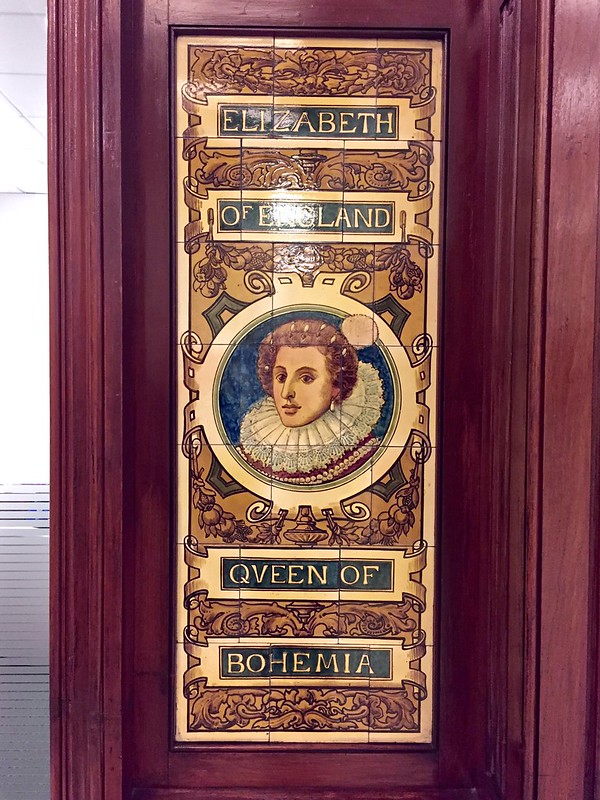 Another series shows scenes from Ben Jonson’s plays, Jonson having apparently been a frequent visitor to the original Palsgrave Tavern. 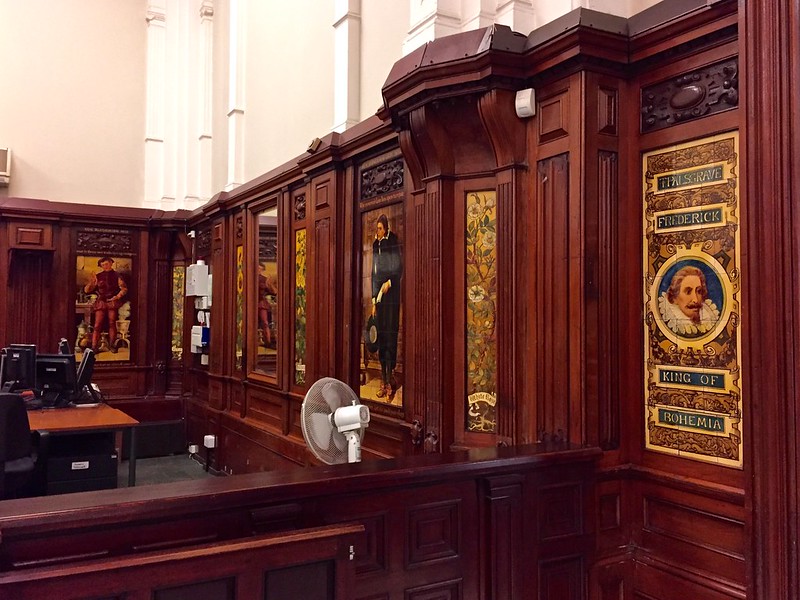 You can visit the bank in normal banking hours.

4 thoughts on “Flying fish and warring roses – what kind of bank is this?”